Life on the Colorado Plateau

I have been pretty busy lately, and felt it was time to sit down, send out an update, and say hello to everyone. I hope you are enjoying the summer. The last update that I sent out was at the beginning of spring crews with CCYC. It was a very different experience than I am used to, but overall I learned quite a bit. I got to work with some pretty interesting characters, see some beautiful places, and learn a lot about some of the ecosystems of the colorado plateau and the invasive species that are hurting them.

So going in chronological order, I will recap what I have been up to. Just outside Hovenweep National Monument, there is a canyon full of undocumented archaeologic puebloan sites. Four Corners School leads a trip where the purpose is to go out on BLM land and survey and document what is out there. One of the guides for the trip has a permit with the BLM to do these surveys and people come from all around the US to help her perform them. We found some really cool stuff throughout the trip including ruins and other evidence of past civilizations. Artifacts included stone tools, pottery sherds, pictographs and petroglyphs, and corncobs. Since I was a newbie, they even named a site after me, Jake's site. It was a really great experience and I learned a lot about archaeology in action. 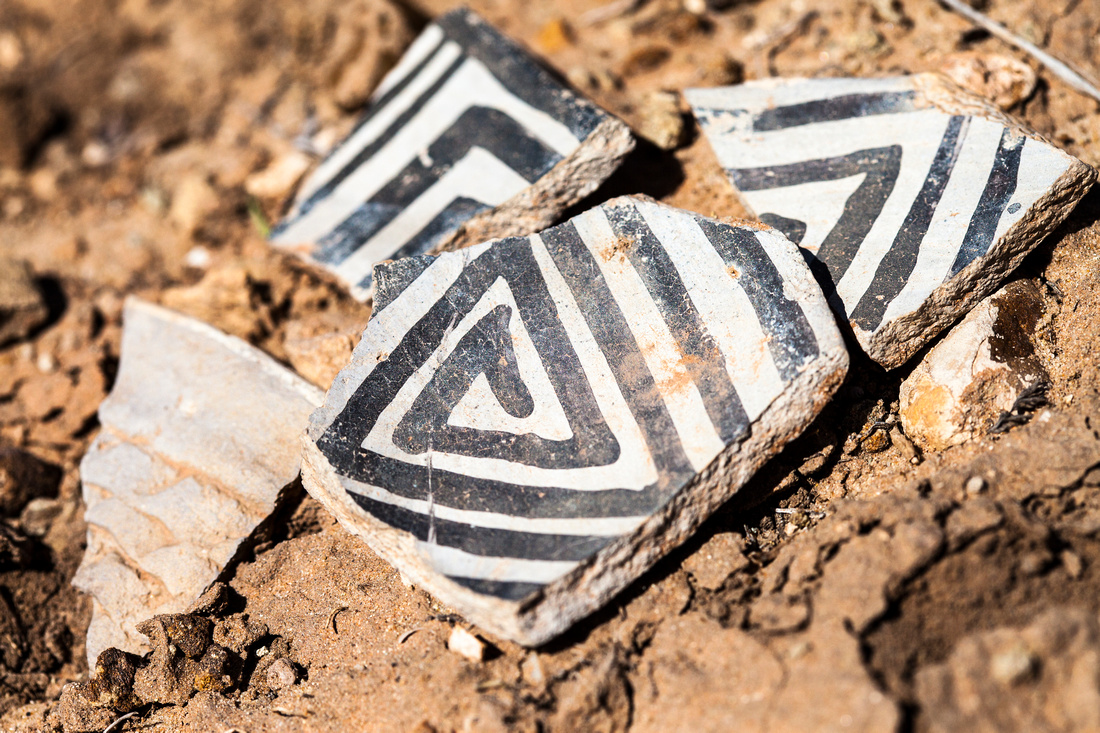 In addition to work with Four Corners School, I have recently been added to the Southeast Utah Group media team to help build their photo database. So when I am not at work, I have been making trips to the surrounding parks.

I met up with a friend in Arches and we did some night hiking because I have been trying to learn how to photograph the Milky Way. We hiked up to Delicate Arch at 3am and got some pretty cool shots. This photo actually went somewhat viral on the internet and social media channels. It received 60K+ views in about 24hrs and is now going to be made into a t-shirt by the university of Utah's physics and astronomy department. 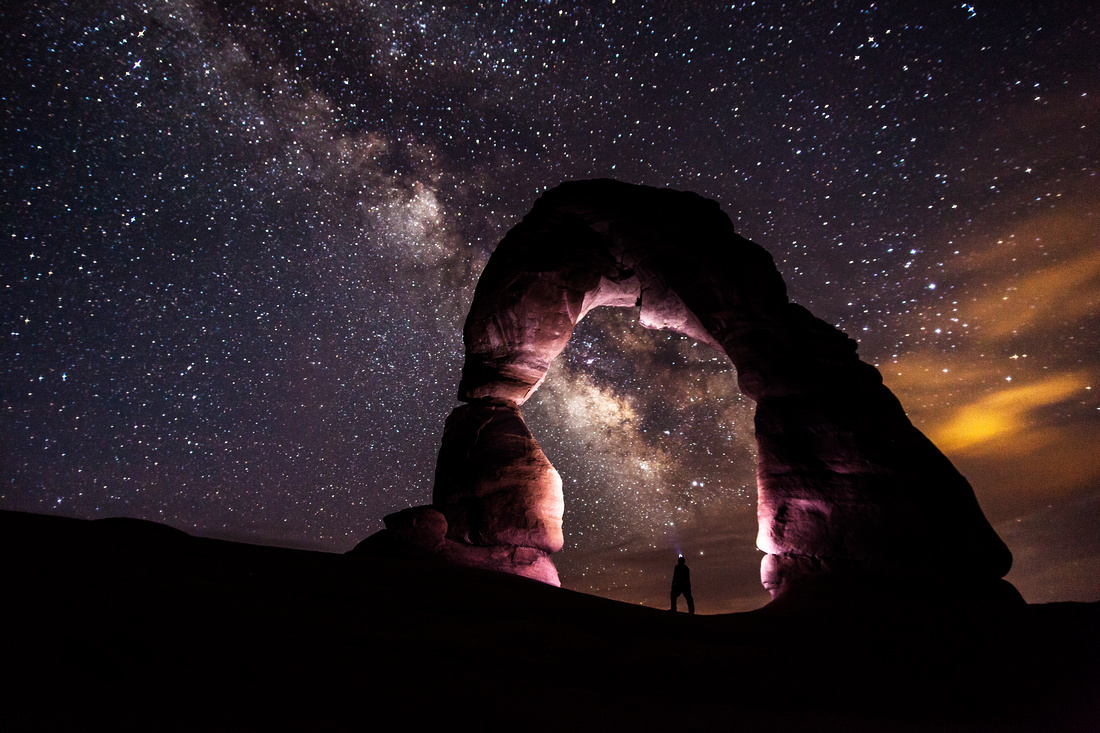 I also spent a long weekend in Natural Bridges National Monument where we did some day hiking as well as some night photography. We were there when the wildflowers were in full bloom and before the temps got too hot. I would say that this park is one of my favorite small parks. It has some great hiking and is great for night sky viewing. On the night hike we did, it was so dark that we were able to see our shadow cast from the light of the Milky Way. During the day we hiked the canyon to all three bridges and saw some awesome petroglyphs and a relatively intact ruin called horsecollar ruins, named for the shape of the windows. This photo of the Milky Way made the front page of the local newspaper which was pretty cool. 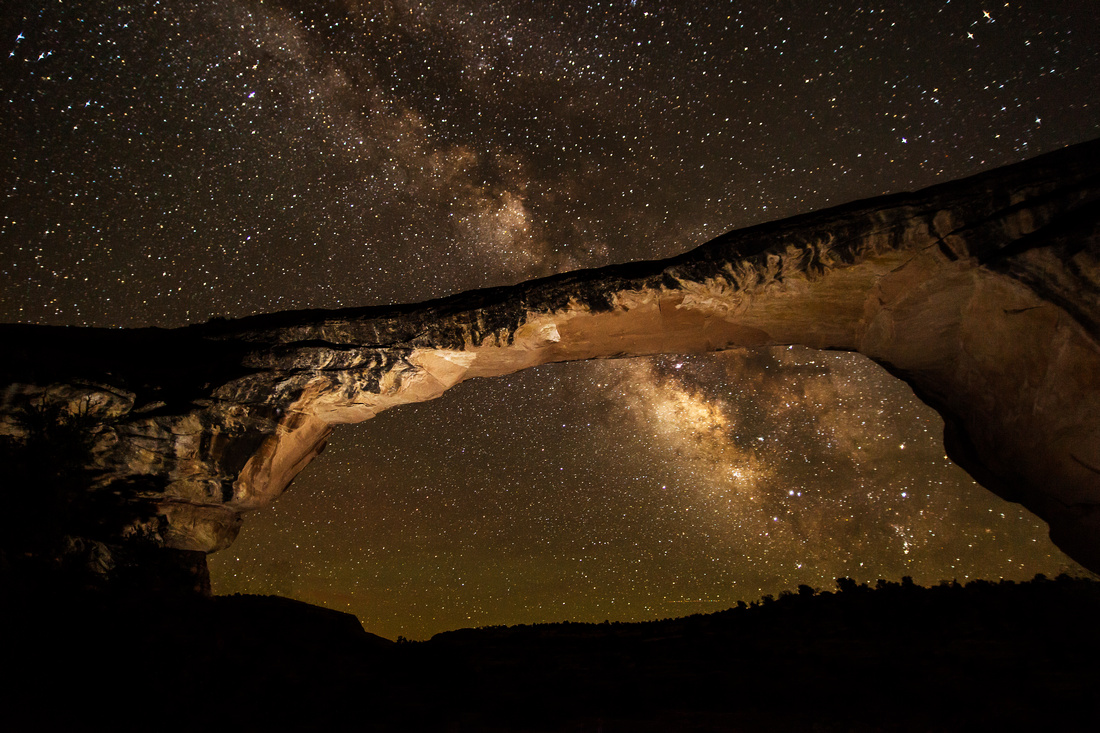 Next, I was a part of a photography backcountry trip to create content for Canyonlands 50 anniversary. We hiked up into Salt Creek and then up an over into Horse Canyon. We found some class 3 arc sites along the way. Class 3 means that no one will tell you where they are, but if you find them, you are welcome to take photos, just not advertise where you found them. This was an awesome trip. Neal, the media specialist for the park was along for the trip and was super knowledgeable. I think he has been in the area for close to 20 years so he is basically a living encyclopedia of cool shit about the area, not to mention a great photographer.

The next trip was to Mesa Verde National Park where I went on a couple tours, found some wildflowers, did some birding, and hiked a small bit. Mesa Verde is such a cool place, but the access to the park is VERY limited to people. There are over 4K known arc sites in MEVE and people have access to about 30 or so. Also, whenever there is a fire, which is often because of climate change, they find new sites that are uncovered by the fire. I have special access to the sites now because I have been setup as a volunteer photographer for the park. I hope to get back there and take some night shots there. 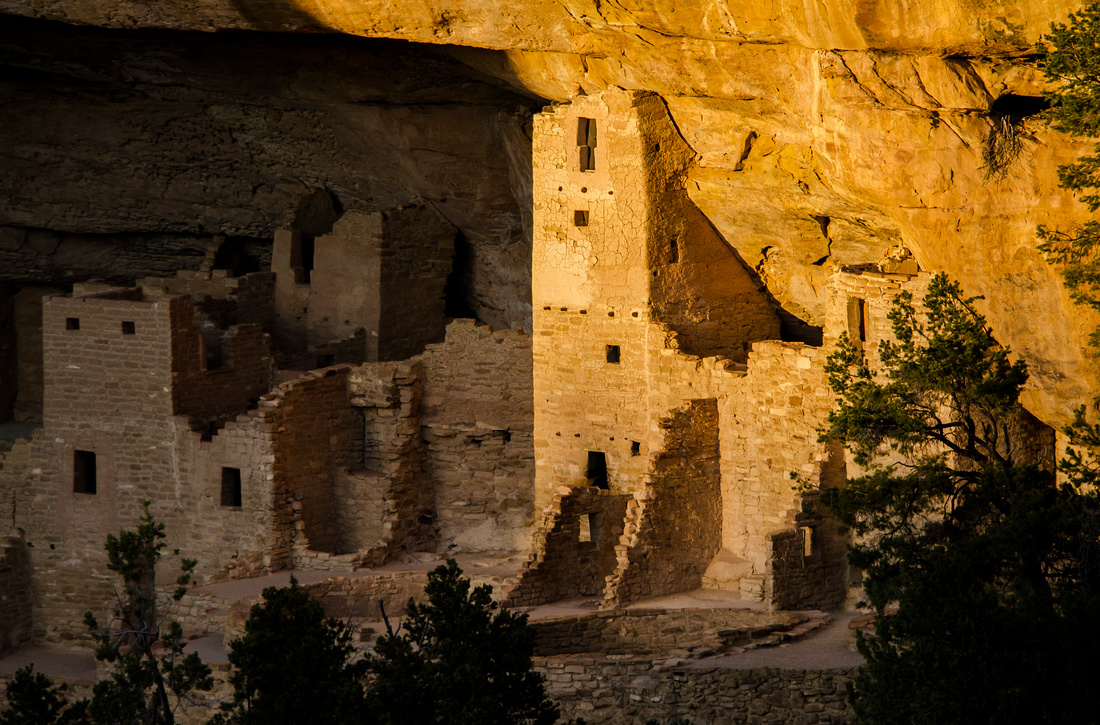 The next trip was to Great Sand Dunes National Park. This was a blast for me, not only because I have never been there, but because of how surprisingly awesome this park is. The first day we hiked into the dune fields and to the top of High Dune. Not only was it a slog to hike up a mountain of sand, but the winds were roaring at a steady 30 mph and gusting up to 50mph. This made it an extremely terrible/hilarious experience. I am pretty sure I am still finding sand from that trip in weird places on my body. Also while in the dunes that day we found the tiger beetle which is an endemic beetle only found in the park. The ranger said it took her 7 years to see her first one. It only took us 5 hours. Boom. The next day because it was still windy, we decided to hike up into the surrounding Sangre de Cristos mountains. We hiked to Zapata Falls and made our way towards South Zapata Lake. We didn't make the lake because we took a wrong turn, but we did make it close to 11K feet which is the highest that I have ever been. Holy shit, there is no oxygen up there! I drank about 8 liters of water on the hike and still got headaches. I know 11K ft is nothing, but since it was my first time up there, I was definitely feeling it. That night I wanted to get up and take some Milky Way shots so we headed back into the dunes. As I looked north towards the mountains, I noticed some sky glow. I was pretty bummed that there was light pollution because I had heard that this was a dark sky park. Then I noticed that the light pollution was moving. It wasn't light pollution at all, but the aurora borealis. I couldn't believe what I was seeing. It had to have been an extremely strong storm to be visible in southern CO, but sure enough, it was. The photo I got from that trip also made the rounds on the internet and was picked up by the department of the interior. A separate photo of the dunes went viral on the internet and received 60K+ views in 24 hrs. 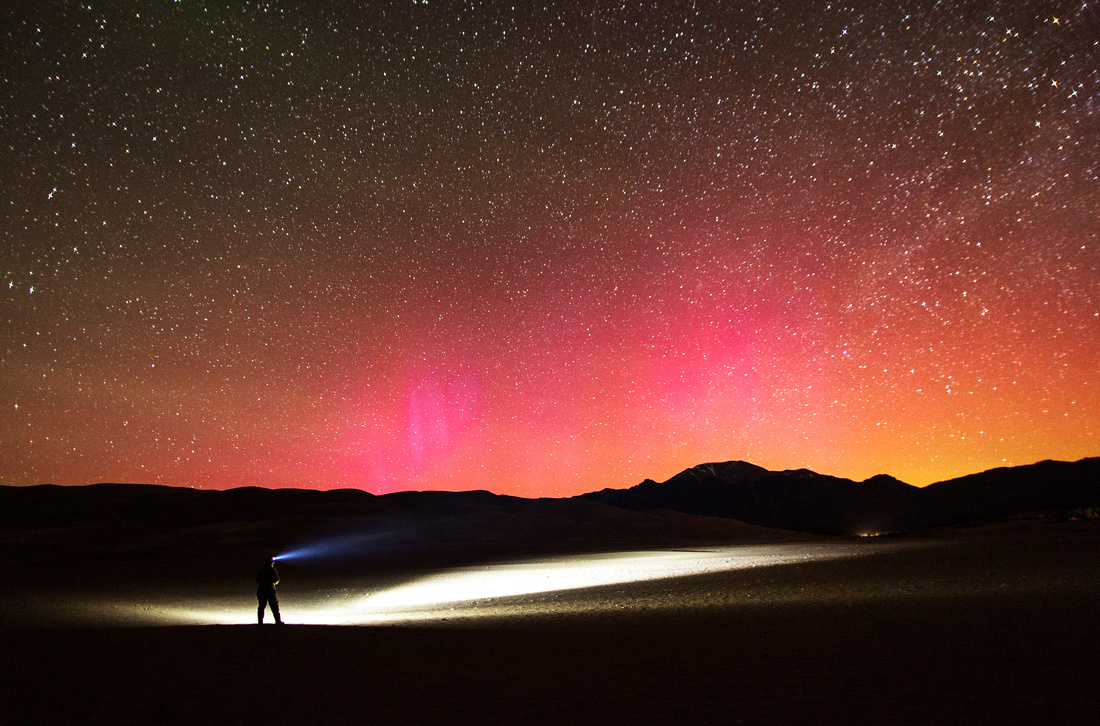 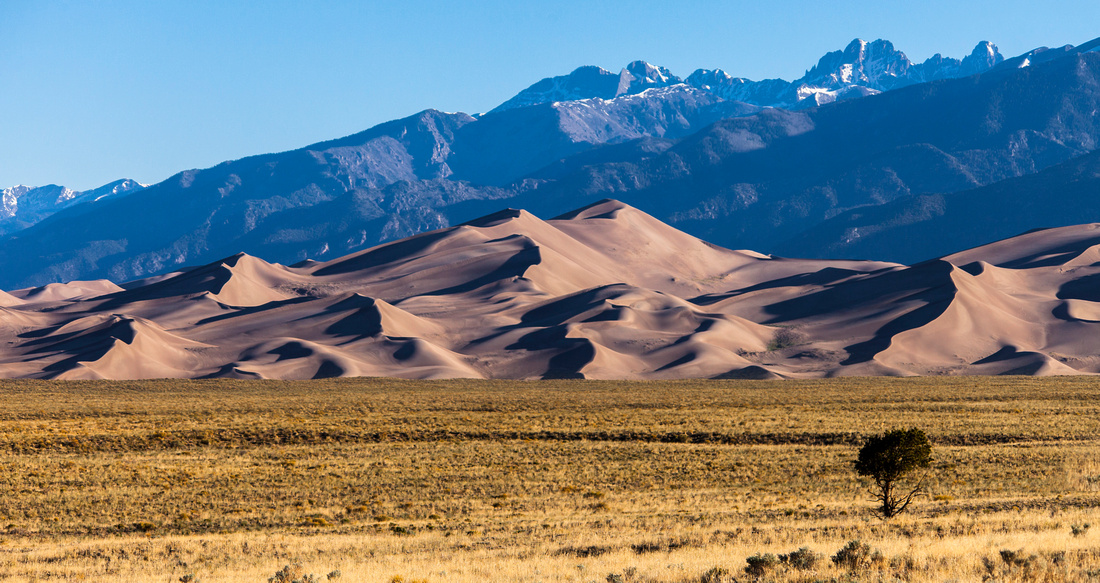 June was a very busy month, with a wedding in FL, CCYC crews wrapping up their work for the spring, and then another wedding in HI, I was all over the place. I was able to work enough to build up comp time so that I could stay in HI for a couple weeks to make the trip worthwhile. We flew in 5 days early to the Big Island and did some sight-seeing. We hiked to the lava  in Hawaii Volcanoes National Park and also saw the Halema'uma'u crater at night under the Milky Way. Went to a black sand beach with some sea turtles, and also visited the other National Parks on the big island. Then we flew to O'ahu and then headed to the North Shore to the Turtle Bay resort. From there we just went to the beach, snorkeling in Shark Cove and swam with some sea turtles, and hiked around the property checking out all the cool birds. It was a blast of a trip and I look forward to going back again in the future. 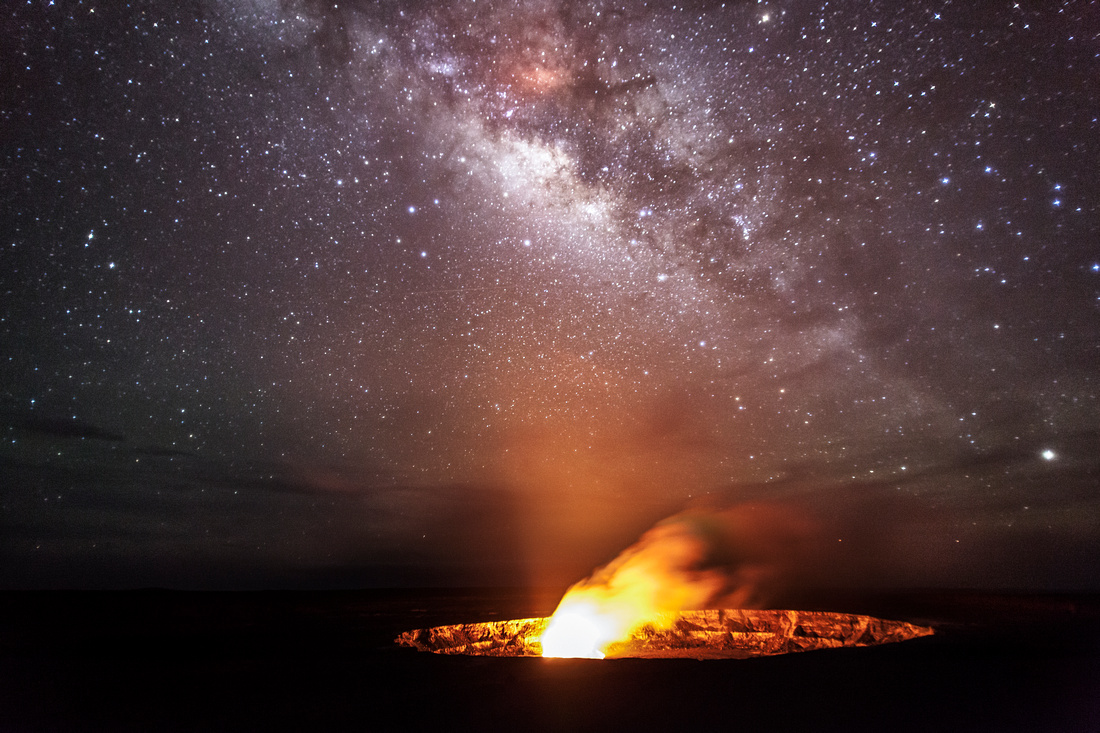 The day after getting back from HI, was the supermoon. I don't know if you guys saw it, but I was able to get some cool photos from the even while in Arches. This photo was picked up by gizmodo, and this one was featured on Yahoo and was also printed in the local newspaper. The funny thing was that I didn't even know about it, but was invited to dinner by a friend in Moab who is the photographer for the park and was going to go watch it. Thanks again Neal!

This past week I went on a river trip down the San Juan. While I was away it turned into summer here. The high everyday on the trip was over 100ºF and was a high of 109ºF on the last day. I didn't really realize how how it was because we were hanging out in the river most of the time. The trip itself was awesome though. It is funded by a grant from the BLM and is education based. On the trip we had a Ph.D geologist explaining what we were seeing along the way, and an astronomer who brought along a catadioptric telescope to view the stars at night. The San Juan River is full of cool stuff. At first it is predominantly ancestral puebloan sites and rock art, but then the river cuts through some CRAZY geologic uplifts exposing some awesome formations and fossils. Even though the trip was with teenagers, who were not pleasant at all times, it was a blast to get to see so much and learn about what we were seeing.

Summer crews start up this next week which means back to work. We will start off with another trip down the San Juan as an orientation trip for the summer crew members. Another river trip? OK, I guess I can handle that.

Well that's all that happening in my neck of the woods, I hope that everyone else is doing well. I'll talk to you all soon! Here are links to all the photos on flickr.