Back in the Lower 48

Hello everyone! I finally have some time to sit down and crank out another email. The last time that I wrote I was still in Denali and have moved quite a bit since then.

The season in Denali ended well. I was able to finish up the projects that I was working on and all 3 were featured stories on NPS.gov homepage. The last one should be running next week so BOLO. They wanted to space the featured stories out time-wise, so it didn't seem like the Denali show. After my season was over in September, I had to make it to FL as fast as possible. My friends Branko and Lindsey were getting married and asked me to be the officiant. So yes, I am now an ordained minister and can perform weddings and baby naming. Here's one for you, Jake. It's a great name. In order to get to FL in time, I drove from Denali to Haines (~800 miles), then took the ferry from Haines to Bellingham (~1000 miles, The inside passage trip was fairly uneventful due to poor weather except for the last day. The clouds finally broke, and we saw a pod of orcas fishing, humpback whales breaching, sea lions sunning on rocks, and a killer sunset. All in all a cool way to travel from AK to the lower 48.), and then flew from Seattle to Tampa. Since I had to be in FL for the wedding, I figured that I should stay for a month or so to see friends and family. I have been wanting to see the National Parks in FL as well.

Wedding was awesome, went to some gator games, then made my way to SoFla to see my parents. From there I planned a FL parks trip with my friend's wife, since all my friends are lame and have "real jobs." Finally made it to Dry Tortugas NP! What a cool place. It was a beautiful day on the water and on the island. I initially wanted to camp overnight, but time was a limiting factor, so we only went for the day. We went snorkeling and saw tens-of-thousands of fish. When we were walking the perimeter of the fort, we saw some kinda shark that was about 9 ft long, and a few barracuda that were 4 ft long. I am more comfortable with bears than I am sharks. Glad I wasn't in the water when I saw them. After Tortugas we headed up to Biscayne NP to go snorkeling as well. The fish weren't as plentiful, but the coral was amazing. We had 98% visibility as well, so there was lots to see. The only fish that I remember seeing was a baby hammerhead shark. It was cool to see a 2 ft miniature shark just swimming around like a boss. The day after Biscayne, another buddy of mine, Larry (who recently finished his first IronMan) went with us to we went to Everglades NP and Big Cypress National Preserve. We walked and biked around the Coe and Shark Valley areas looking for alligators and birds. Damn that place is hot. I can't remember the last time I was so hot. ughh. After the 2 weeks in south FL, I stayed in Orlando for the remainder of the trip. I took photos for my friends companies, engagement photos, and got caught up on naps and golf. Man, I can't wait to retire. I guess I have to get a job first to do that. Which is a perfect segway. Recently in Denali, a bunch of folks are leaving or retiring, including our Superintendent, Chief of Interp, East District Supervisor, my winter boss, and my boss in the summer is also looking for another job. Needless to say things will be different. As a seasonal, we are always applying for jobs, trying to turn this thing into a perm lifestyle. Without getting into too much detail, I will just say that it ain't easy, and it isn't looking to get any easier in the future. So I made the decision in my mind to do one more summer season, and then apply for an AmeriCorps VISTA position. This is the stay at home version of PeaceCorps. This program is 12 months long and then gives you 12 months of Non-competitive hiring status, which should be the ticket I need to get my first permanent job (If anyone has more info about how this works, please feel free to let me know). I started filling out my profile and resume, just to familiarize myself with the system, and to be ready to apply once next summer is over.

The next day, a Tuesday, I flew back to Seattle and started planning my National Park tour of North Cascades, Olympic, and Mount Rainier National Parks. While researching travel plans online, I was explaining this idea about AmeriCorps to my cousin. They wanted to know what kind of jobs existed so I started browsing. I picked UT as the state that I wanted to work in, and the 3rd job that popped up was a "Social Media and Capacity Building" position. This person travels around the four corners area, and photographs Youth Conservation Corps groups working in National Parks. They also develop marketing material, through graphic design, and hope to produce some videos for recruitment that will live on YouTube. Even though I was planning on returning to Denali this next summer, this seemed like a great job opportunity that I shouldn't pass up. So I submitted an application, on Wednesday, left a phone message with the hiring official, and then headed out to North Cascades on Thursday.

Now I already know that this probably isn't the best time to visit the National Parks in WA because it's starting to get a little cold, but I don't know when I am going to be in the area again, and besides, YOLO! I arrived in North Cascades and camped at the Colonial Creek Campground. Friday morning I woke up to snow, and it kinda put the halt on my hiking plans. So I just drove over the pass and took pictures from the road. It was crazy beautiful. This whole time I was out of cell service, until I got to the town of Winthrop. Not 2 minutes after I got service, I got a call from the hiring official the the AmeriCorps job. He wanted to schedule an interview for the following week. I explained that I was traveling and wasn't sure of my schedule and offered to interview later today as an alternative. He agreed. So let me put this into perspective. I applied on a Wednesday night, and was interviewing for the position 40 hours later. I forgot how easy things can be when you aren't dealing with NPS hiring. He said that he would get back to me around Thanksgiving to let me know one way or another.

On Tuesday I called back to ask some questions about the start date of the position because I was looking to travel to Europe for a few weeks and didn't want the dates to overlap. After talking for a few minutes he told me that he didn't see any problems with my plans an would be getting back to me about the position sooner than he anticipated. That night I booked my Flight to Europe and headed out to Olympic National Park. As I headed up to Hurricane Ridge, I received a voice mail message from the hiring official at AmeriCorps officially offering me the position. From application to job offering was less than a week... MINDBLOWN! I haven't officially accepted the position yet, but I plan on talking to him Tomorrow to getting the paperwork rolling.

In addition to receiving the good news, the weather at Olympic was stellar. Fresh snow and a bluebird day atop the mountain. Did some hiking at the top of hurricane ridge, filled out my Junior ranger booklet and headed back down to the visitor center to make it there before closing time at 4. On the way down, I hit a patch of slush and slid off the road into a ditch. I was only going about 15 mph, so I wasn't too far off the road. Also, you may remember that I had done this before on the drive up to Alaska in 2011. After that trip, my faithful companion bought me a tow-strap as a gift to keep with me if it were to ever happen again. When it happened in Canada, lots of trucks drove by, but no one had a tow strap. This time in WA, I had the tow strap but everyone was driving a freaking Toyota Prius... awesome! After waiting for 2.5 hours a park ranger finally showed up and pulled me out in about 30 seconds. By the time I got back to the Visitor Center it was 4:30. Lights off and locked. In the parking lot I ran into a ranger heading home. I explained to him my situation, and without hesitation he brought me back into the visitor center and swore me in. Awesome. Doing the people's work! The next day I headed out to the coast and the Hoh rainforest parts of Olympic. Unreal. What a cool park. I could definitely see myself working there. As impressed as I was, I was informed by some locals that I needed to come back in the summer time to really see what this place had to offer. The tides in the winter are much higher and the days are shorter. In order to see the cool tidepools and seastacks, summer is the time of year to do so. After watching the sunset I headed back east to make my way to the last place I wanted to see, Mount Rainier NP. 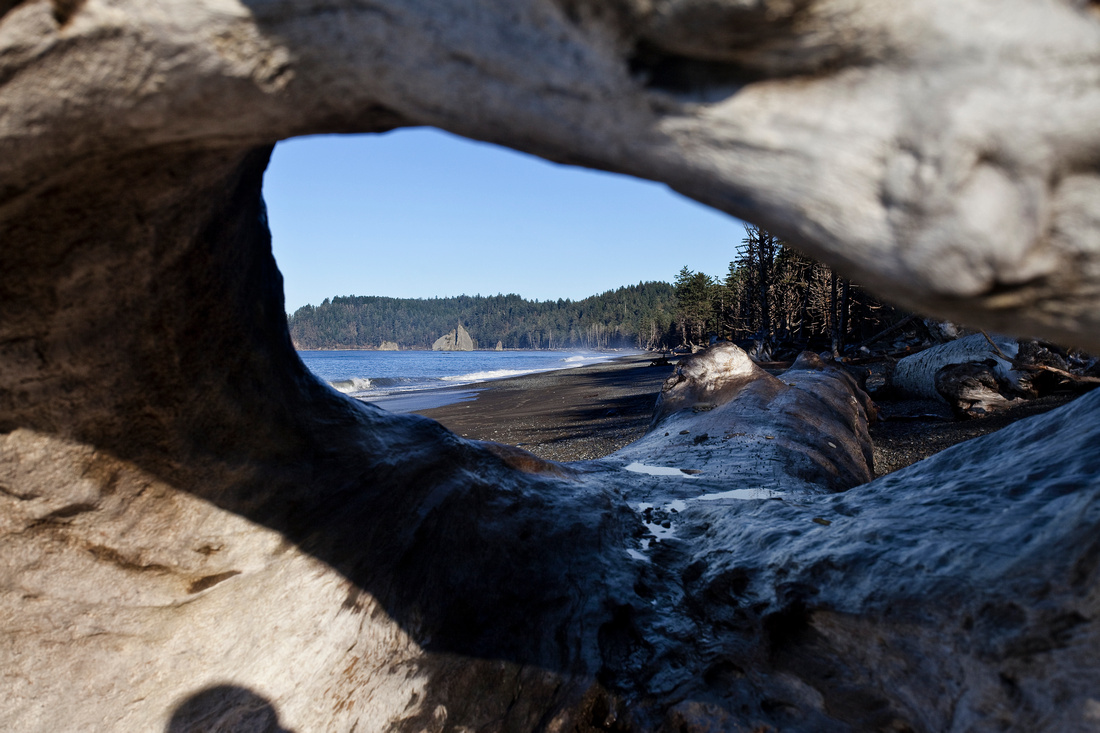 The weather finally moved in and it was a rainy-snowy-cloudy day. Since I couldn't see the mountain, I focused more on the stuff that I could see. Cool waterfalls, huge sitka spruce, and tiny mushrooms and lichen were abundant. Another great park. What I learned from my travels to Washington's national parks, is that you need need to get into the backcountry to really see these places. I will have to add them to the list of places to visit again with more time. So now I am back in Seattle and my life is booking up pretty quickly. I am headed to Montana for Turkey day, then through WY on my way to Denver. From there I will leave my car, fly to NJ for a long weekend to visit some friends, and then continue to Europe for 5 weeks. I will base camp in Naples and then make trips to the surrounding areas. I think trips to Greece, Poland, Turkey, and the UK for a castle and scotch tour are in the works. Then I will be returning to Denver and driving to my new home for the next year in Monticello, UT. If you are interested in visiting, please do. I am within a day's drive to the following places:

**Haven't been there yet

I will need travel buddies. This year looks to be a great one. Lots of possibilities. I hope everyone is doing well wherever you are. Hope to send another email from Europe. Here is a link to the most recent pics.